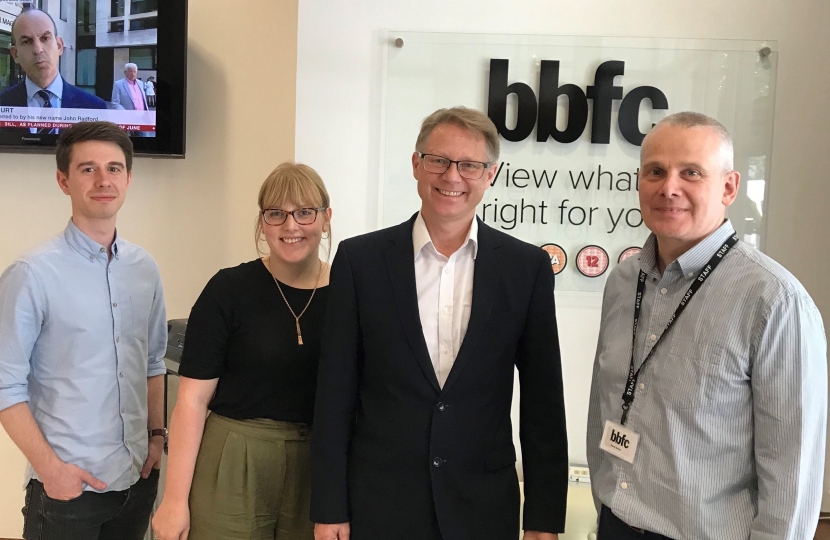 I recently visited the British Board of Film Classification to find out more about the work they do putting age classifications on film and television. If you have ever been at the cinema and seen the certificate at the start of the film you will have seen Chief Executive David Austin’s signature. David was kind enough to meet me and explain the work that they do. The BBFC Male classifications on all film output in the UK to ensure that viewers can make informed choices about the kind of content they are about to consume. Whether that is checking the age appropriateness of a film or allowing the viewer to be aware if they will be exposed to particularly violent content.

David was also able to tell me about the ratings work they were now doing for Netflix. This was after feedback from many parents who wanted to know the suitability of content for their children and wanted films on Netflix to be rated the same as any other medium.

The team also classified ‘The Bay’ the ITV drama set in Morecambe before its release. I was also delighted to hear that the team will be back again to film in our area as series 2 was commissioned.

This week the Government announced New Marine Protection Zones, one of these areas was the Lune Estuary which gives protection to the marine area around Overton , Sunderland Point and round into the start of Heysham. The network will help to deliver the government’s vision of clean, healthy, safe, productive and biologically diverse oceans and seas. MCZs protect typical, rare or declining habitats and species found in our seas. Smelt were once widespread in estuaries in the UK but have declined considerably over the past 200 years. They are known to congregate in large shoals in lower estuaries and migrate into freshwater where they spawn in spring. Estuaries such as the Wyre and Lune therefore provide critical habitats required to complete smelt lifecycles, including for feeding and post-larval development. Smelt is an indicator of ecosystem health, being very sensitive to a broad range of environmental degradations, including overfishing, loss of spawning habitat, blockage to migration and water quality impacts.

'The UK is already leading the rest of the world by protecting over 30% of our ocean - but we know there is more to do.

Establishing this latest round of Marine Conservation Zones in this Year of Green Action is another big step in the right direction, extending our blue belt to safeguard precious and diverse sea life for future generations to come.

The latest round of protections follow an extensive consultation, including with local fishermen and marine conservation experts, which received overwhelming support for the proposals. In total, over 48,000 responses were submitted by members of the public, with Defra designating all 41 of the proposed sites and expanding protections at 12 existing sites.

Each designation is based on scientific evidence provided by marine experts from Natural England and the Joint Nature Conservation Committee (JNCC), as well as socio-economic information provided by stakeholders and Defra economists. Management plans will now be put in place to protect the newly-designated habitats and species.

Regulators, such as the Marine Management Organisation and local Inshore Fisheries and Conservation Authorities (IFCA), will be responsible for ensuring the Marine Conservation Zones are managed to protect their species and habitats, working with local fishing communities and other organisations.'

If you are a Constituent and would like my help with an issue please do not hesitate to contact me either by email David.morris.mp@parliament.uk or by phone 01524 841225. Please make sure you include your full postal address with any correspondence.