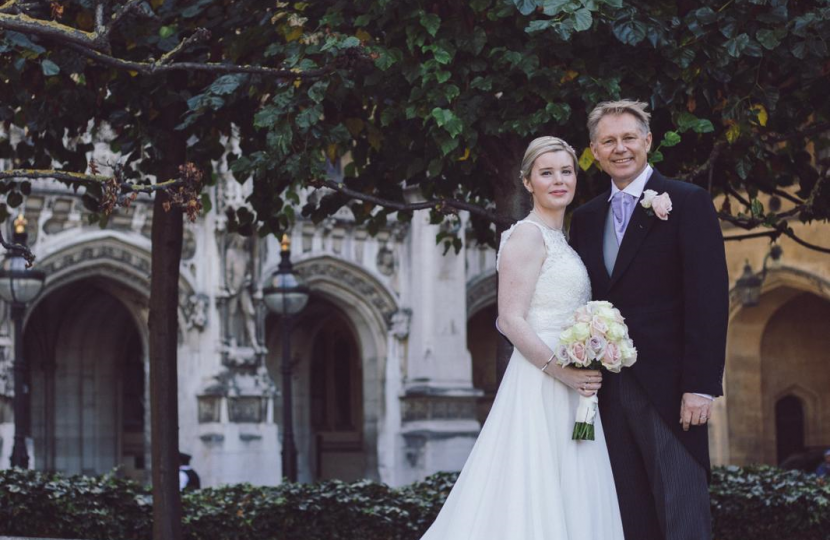 Last Saturday I married my partner Emma in a ceremony at the Chapel of St Mary Undercroft in the Houses of Parliament. The ceremony was presided over by the Speaker’s Chaplain Rev Rose Hudson Wilkin and we were pleased to welcome Rev Linda Mackluskie from our home church St John’s to do a reading at the service. Ian Paisley Jnr MP also gave a reading. The Bridal Collection in Lancaster were fantastic at helping us both find the outfits that we wanted to wear on the day.

We had a brilliant day and enjoyed celebrating our marriage with friends and family.

Thank you to all of you who have already sent cards and well wishes, we have been overwhelmed by your kindness and the number of messages we have received.

On Tuesday the supreme court ruled that the prorogation of Parliament was unlawful and therefore we returned to Parliament on Wednesday. The Prime Minister has been crystal clear that he respects the Supreme Court’s judgment, the judicial process and the Rule of Law. It is however the case that the Government respectfully disagrees with the Court’s decision. As the Lord Chancellor and Secretary of State for Justice has said, the UK’s world-class judiciary acts free from political influence and all personal attacks on judges are totally unacceptable.

The outcome of the case has no effect on whether or not the UK leaves the EU. This has already been decided by the electorate in the referendum. The Prime Minister has repeatedly said that Brexit will happen on 31 October and I fully support this position. The date of the UK’s exit is set in EU law and only the Government has the power to change it with the unanimous agreement of all EU member states.

In the debate in Parliament on Wednesday night Brexit tensions which had been worsening reached a crescendo and there was an acknowledgement on both sides that the inflammatory language which has become commonplace in the extremes of the debate had to stop. This is welcome as personal attacks have no place in politics, politics is about getting things done and getting a result. I welcome that these tensions have taken a step back following this debate and trolling websites have been deleting the most abusive of comments, abuse, violence and threatening behaviour have no place in our political discourse and I welcome the steps that have been taken to stop this behaviour.

I want to reassure people that the cancellation of prorogation does not change us leaving the European Union and the Government will be doing everything they can to ensure that we leave the European Union. My stance has not changed I am 100% committed to honouring the result of the referendum and I will continue to use my vote in Parliament to make sure we leave. I am confident that the Prime Minister will return from the EU Council will a deal on the 17th October, and I will vote for leaving with a deal in Parliament. If the deal does not pass I will support no deal. Thank you to all of you who have taken time to write to me in recent weeks supporting the Prime Minister and stressing how important it is that we need to leave. I totally agree with you and will not do anything to block us leaving the European Union.

If you are a constituent and would like my help with an issue you can do so either by contacting me by email david.morris.mp@parliament.uk or by phone 01524 841225. Please make sure you include your full postal address to allow me to respond to your enquiry