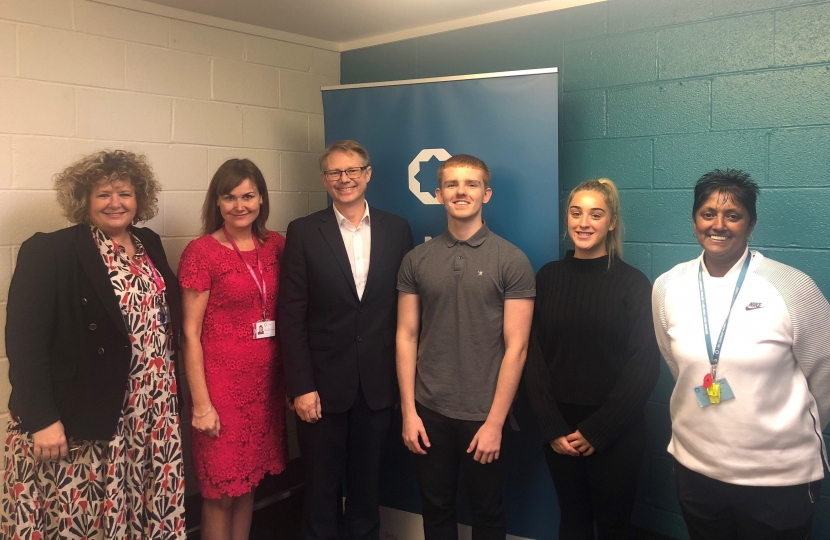 On Wednesday I was given some fantastic news from the outgoing Secretary of State for Education Damien Hinds MP that Bay Leadership Academy had been awarded £455,000 to allow them to carry our building maintenance works.

In last week’s column I talked about a recent visit I made to the academy to talk about their exciting plans to improve the education offer at the school. During this meeting they told me that they had put together a package of asks of work they would like to carry out to the environment at the School to improve the structure of the building. Much like what I was able to do at Morecambe Bay Academy where I was able to secure £4 million pounds for the roof to be repaired, I submitted to case to the Secretary of State. I was able to talk about the positive changes that Star Academy had made to the school and share some of the stories the Head Boy and Girl had told me about their experience when I visited the School. I met the Secretary of State again on Wednesday morning and he was able to tell me the good news that the School had been awarded $455,000 which allows them to carry out all of the maintenance works on the building that they wanted to do.

I am delighted that the Government has allocated this money to the school. When schools are needed to be academized because of poor OFTED performance it is often the case that buildings are also in a poor state of repair. For the Academies to implement positive changes to education the building also needs to be fit for purpose and a nice place to learn. The money I have secured allows the roof to be repaired, windows to be replaced, the playground to be resurfaced and for works to be carried out on the boiler.

On Wednesday Boris Johnson was appointed Prime Minister of the United Kingdom, following the end of the Conservative Leadership contest. During the contest you will I know I backed Jeremy Hunt to be the next Prime Minister. He ran an exciting and honourable campaign and I was extremely proud to have been a part of it. It is now important to ensure that the whole party and indeed the Country untie behind Boris Johnson as he works to deliver Brexit. I know that many of you are as frustrated as I am that Brexit has not yet been delivered. It even more frustrating to know that if every MP had copied my voting record on Brexit we would have left with a deal on the 29th March. But we are where we are and we must all work with the new Prime Minister to ensure we leave.

During a meeting of the 1922 committee on Tuesday just after the leadership result was announced I asked the Prime Minister if he would honour the support for the Eden Project given by Thresa May and ensure that the project got the Funding it needed. He pledged to support the project and confirmed that he would be happy to come and visit the area to see the site.

The new Prime Minister has also made recruiting Police officers as his top domestic priority. Boris Johnson has pledged 20,000 extra police officers over the next three years. The recruitment drive will start in September, so if you have always wanted to join the police service now is a fantastic opportunity to apply.

If you are a constituent and would like my help with an issue please do not hesitate to contact me. You can do so either by email david.morris.mp@parliament.uk or by phone 01524 841225.