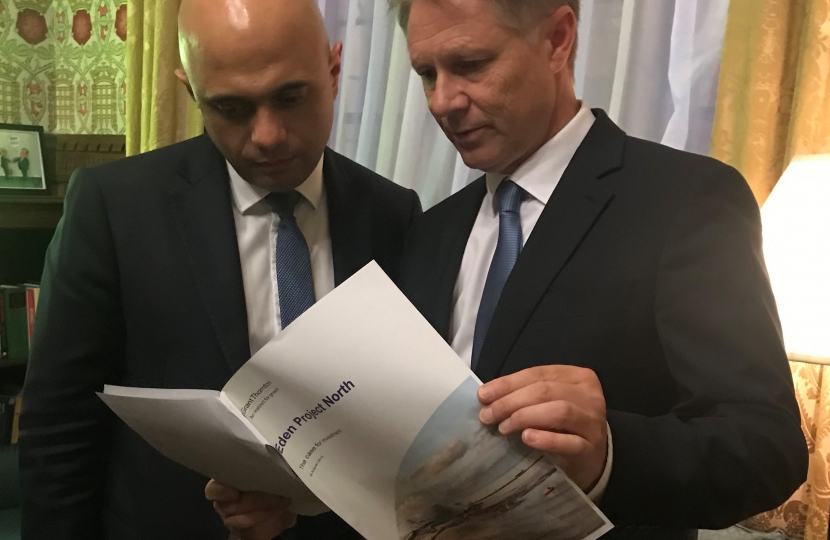 This week I met with the Chancellor Sajid Javid MP to present him with the Case for Investment for the Eden Project in Morecambe. This study marks the first stage in the formal process to bid for Government funding and now the document is with the Treasury they can start to look into the Eden project with a view to allocating funds in the future.

Eden would be an absolute gamechanger for Morecambe and the case for investment proves that. I am delighted that the Chancellor was able to meet with me to present the report in person and was able to allocate a member of his team to look into the Project. I have been working behind the scenes in Government on this for many months if not years now and this document is the first stage of the formal bidding process for funding.

The Prime Minister has already agreed to help me secure the project, and I know with such a strong case for investment that Eden presented the Chancellor will not be far behind with his backing either.

A few months ago I started working on a campaign to combat rouge traders as a result of a constituent Paula De Santana contacting me. She had been a victim of a rouge trader and her story mirrored that of my own story with a rouge roofer. We have both been working with the Federation of Master Builders on a campaign to licence construction workers so that people know they are getting a proper certified trader when they book a job. We have some fantastic tradesman in our area and this scheme would champion them and ensure that we can all find out who they are and book them for jobs in the future. The industry have set up a task force to see how best to set up such as scheme and have been asked to report their findings back to Government so this can be implemented. They have set up a website here: https://licenceukconstruction.co.uk/ where you can go on and find out more information about the proposals and also share your own stories and ideas of how things can be improved.

Last week the Prime Minister met with the President of the European Commission Jean Claude Junker to work on getting a new deal for us to leave the European Union on the 31st October. The Prime Minister is seeking a deal which will protect the interests of businesses and citizens on both sides of the Channel, and on both sides of the border in Ireland. But if we cannot get a deal – the right deal for both sides – then the UK will come out anyway. While it is not the outcome we want, our preparations are by now very extensive and we will be ready to leave.

If you are a constituent and you would like my help with an issue please do not hesitate to contact me. You can contact me either by email david.morris.mp@parliament.uk or by phone 01524841225. Please make sure you include your full postal address to allow me to be able to respond to your enquiry.