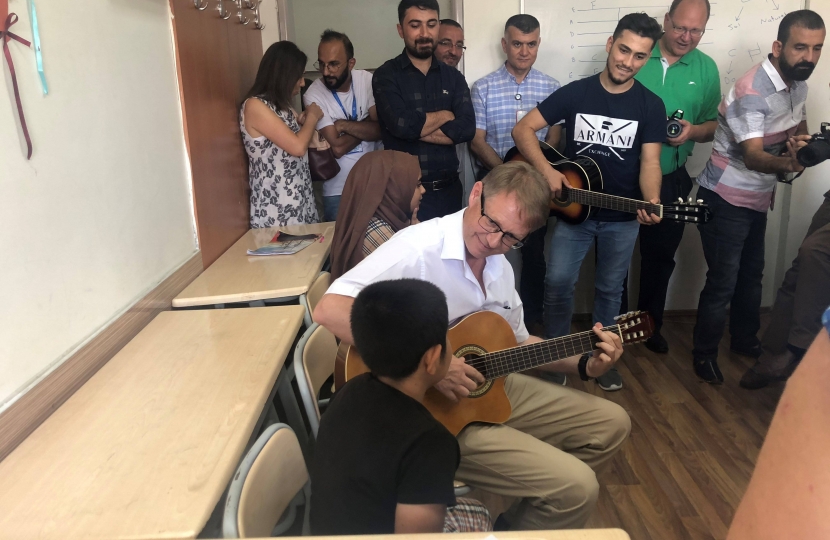 This week I have seen that ‘The Bay’ are back in our area to film season two. The Bay season one was a fantastic spotlight for our area and I am delighted that the film crews are back again to create another series further showcasing our area. Welcome Back!

Last week I took part in a visit to Turkey, it primary objective to assess post Brexit trade opportunities in Turkey for companies both in Morecambe and Lunesdale and across the UK.

One of the areas I visited was Gaziantep which is a city near to the Syrian Border, and only 97km north of Aleppo. One of the main challenges that has been faced in that part of Turkey was the influx of refugees from the war in Syria. The population of the city has grown by a third due to the influx of refugees, and from a humanitarian perspective it was interesting to meet both the Mayor and the Governor of the district to see how the city has managed the volume of refugees now living in the City. At first there were a large number of camps set up where the refugees solely resided, as the view was that as soon as the war was over they would return to Syria. But as the war in Syria carried on for a number of years and showed no sign of ending the Government in the City took steps to integrate the Syrian Refugees into the main population so that the refuges went to the same schools as Turkish Children and lived in the same buildings as Turkish Families. Whist in Gaziantep I visited one of the local community centres that had been set up by the Mayor where both Syrian and Turkish Families could go to learn a number of skills. These centres taught Arabic, Turkish, English, Art, Breakdance and music amongst a number of other classes. Learning together and having the same opportunities promotes community cohesion in these communities.

I was pleased to be able to help in a music lesson teaching children how to play the guitar. The teacher of this class was also a refugee himself and I was interested to hear how he has now integrated into his new home and how he is enjoying his time in Gaziantep. The Turkish system set up to look after the refugees was exemplary and I am interested to hear how the safe zones negotiated with the US in Syria, will work in practice and whether this will enable refugees to return home to Syria in the future.

This week the Prime Minister has ordered urgent action to improve the number of children and young people receiving life-saving vaccinations, halting the spread of infectious diseases. There has been a small decline in the uptake of the measles vaccine in recent years, meaning the UK has lost its ‘measles free’ status with the World Health Organisation, three years after we eliminated the virus. The Prime Minister has called for health leaders to renew their efforts to improve uptake and has tasked the Department for Health and Social Care to deliver a comprehensive strategy to address the issue in the Autumn. We are also calling on social media companies to take decisive action to tackle misleading information online and the Prime Minister has called a summit of social media companies, to ensure they take the necessary steps to remove antivax misinformation. As part of our plan to boost frontline NHS services, we are working with primary and community care providers to halt the spread of infectious treatable diseases in modern-day Britain.