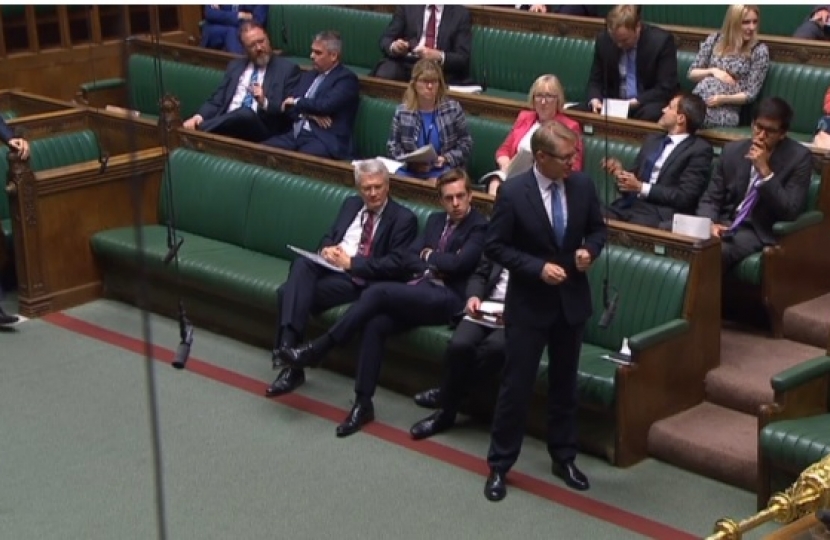 In Education questions on Monday I asked the Secretary of State for Education Gavin Williamson MP to step in and make an academy at the old Skerton School Site.

I thank the education team for giving £5.5 million for upgrades in secondary schools in my area. Recently, however, there has been a disturbing turn of events. Skerton Community High School was closed down by the Labour county council, but it is being hypocritically targeted for an erroneous campaign to reopen it by the Labour party. The school has been closed for five years. Will my right hon. Friend the Secretary of State write to me to tell me what is going to happen to this school in the future and whether it could be used for an academy?

May I take the opportunity to pay tribute to my hon. Friend for the campaigning he always undertakes to deliver the very best for all the schools in his constituency and the campaigning he has done to get the increase in school funding we announced just the other week? I would be more than happy to write to him and to meet with him to discuss this important issue for his constituency.

When the Labour County Council made the decision to close Skerton School there was talk that the reason was that they wanted to sell the land off to build housing. I put a moratorium on the land at that time with the then Secretary of State for Education to ensure that the building could only be used for Education and that any future use of the building must first be approved by the Secretary of State for Education. Since questions on Monday I have been working with the Secretary of State and his team to see if we can open discussions for an academy to be opened on the site. These discussions are in early stages at the moment but it is essential that the site is reopened as a School. The original decision to close it was abhorrent and was against the wishes of the community in the area.

On Monday Speaker Bercow announced that he would be leaving his role as Speaker. It is absolutely the right thing to do and I was pleased that he announced he was leaving. It is time for a new speaker to enter into that role and I will be supporting fellow Lancashire MP Lindsay Hoyle to replace him. Lindsay is currently a Deputy Speaker with a wealth of experience in that role. The role of speaker needs to be someone fair who treats those on both sides of the House with the same respect and curtesy and I believe that Lindsay will be the best person for that job.

As we come to the prorogue period, which replaces conference recess I want to reiterate that I am fully committed to leaving the European Union. I would prefer to leave with a deal and if the Prime Minister brings a deal back in October I will vote for it. However a deal may not pass and if this is the case then I will vote to leave without a deal. We need to leave the European Union and honour the result of the referendum and I will always vote to ensure we leave and will not vote for anything which would thwart or block this.

If you are a constituent and would like my help with an issue please do not hesitate to contact me. You can do so either by email david.morris.mp@parliament.uk or by phone 01524 841225.