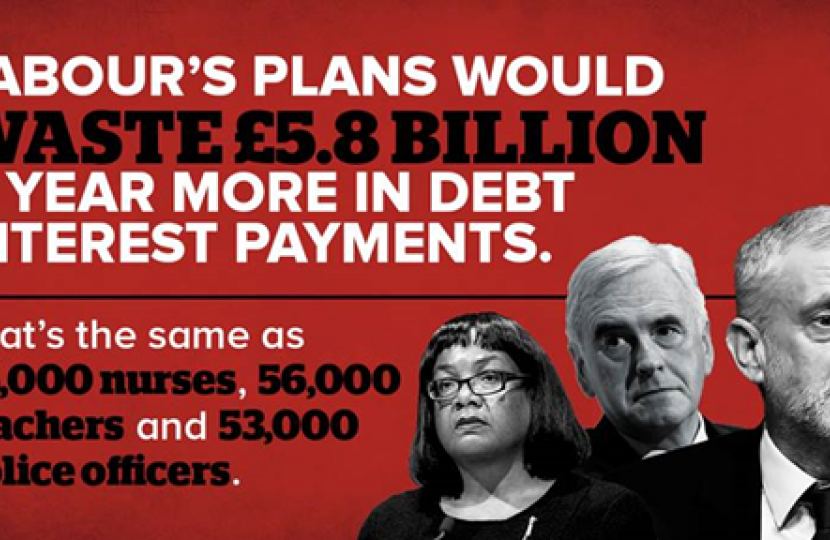 David Morris MP has signed a letter to Shadow Chancellor along with over 140 of his colleagues to urge Labour to come clean about how they will fund their proposed £5.8million pounds of extra borrowing.

Following Jeremy Corbyn’s U-turn on his commitment to ‘deal with’ student debt, 147 Conservative MPs have written to Labour’s Shadow Chancellor demanding that he set out which other plans would face the axe as Labour attempt to deal with £5.8 billion in extra debt interest payments.

The letter is published alongside new analysis of Labour’s plans showing that, by the end of this Parliament, public sector net debt would be more than £250 billion higher under Labour than under the Conservatives. Based on the OBR’s current projections of the cost of government borrowing, this means Labour would spend £5.8 billion more a year in debt interest payments – the equivalent to the pay of around 65,000 nurses, 56,000 teachers and 53,000 police officers, putting tens of thousands of jobs at risk.

In reality under Labour the cost of borrowing would be even higher as their unfunded spending splurge would push up borrowing costs, with even more money being spent on debt interest rather than on vital public services.

Commenting on the letter, the Chancellor of the Exchequer, Philip Hammond, said:

“As their £100 billion-pound broken promise on student debt shows, Labour aren’t being straight with the British public. Labour would take out an enormous loan, but are pretending they wouldn’t have to make cuts elsewhere to pay for it.

“Families, and working people everywhere know that’s not how it works; when you take out a loan you have to pay interest on it, and that means making tough decisions on where to cut back elsewhere.

“Only the Conservatives have a plan to bring down debt so we can invest in vital public services that serve families and communities right across the country.”

‘The Labour Party need to come clean with the electorate. After duping people with their promises on student debt, they are trying to hide the true cost of delivering public services with irresponsible borrowing. £5.8 billion pounds a year in extra debt payments will have an impact on services and it is only right that the Shadow Chancellor is honest with the electorate and tells them which services would be at risk in their plans’