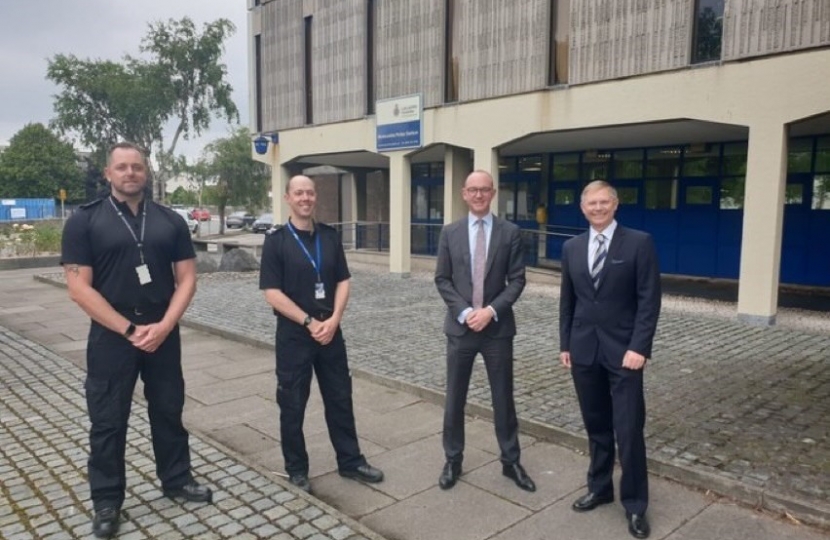 Today, Police and Crime Commissioner Andrew Snowden met David Morris MP at Morecambe Police station to talk to officers on the front line in Morecambe about the issues we are facing in our area.

‘Since being elected in May, Andrew has been committed to seeing Policing from the front line and speaking to as many officers as possible as he formulates his policing and crime plan. I welcomed the visit as it ensures that the needs of the officers in Morecambe are at the forefront of the new policing plan for Lancashire.

Myself and Andrew met with the new Inspector for Morecambe Area Police John Jennings-Wharton to discuss policing and crime in the area as well as hearing about the challenges that police face in dealing with crime and antisocial behaviour. It was also interesting to hear Inspector Jennings-Wharton’s plans for his new role and the positive difference he would like to make to the area’

Speaking afterwards Andrew said he was elected on a promise to crack down on criminals and deal with the issues which affect people on a daily basis and that it was good to hear from Insp Jennings-Wharton about his commitment to delivering on that. He wants Morecambe residents to know that he is on their side when it comes to dealing with the issues that matter most to them. He is committed to working with government to getting more police on the streets and to put resources in the areas where they are needed the most. Andrew wants to see local policing teams tackling antisocial behaviour and cracking down on criminals who blight our communities and engage in criminal activity. His police and crime plan will focus on these issues and provide the strategic focus for Lancashire Police to deal with the types of crime that people tell me on a regular basis need addressing.

I was pleased Andrew took the time to come to Morecambe and meet with not only the new Inspector but officers of all ranks in the station. Andrew is currently conducting a Policing and Crime Survey which you can access through the Lancashire Police and Crime Commissioner website if you would like to share your own views with him.