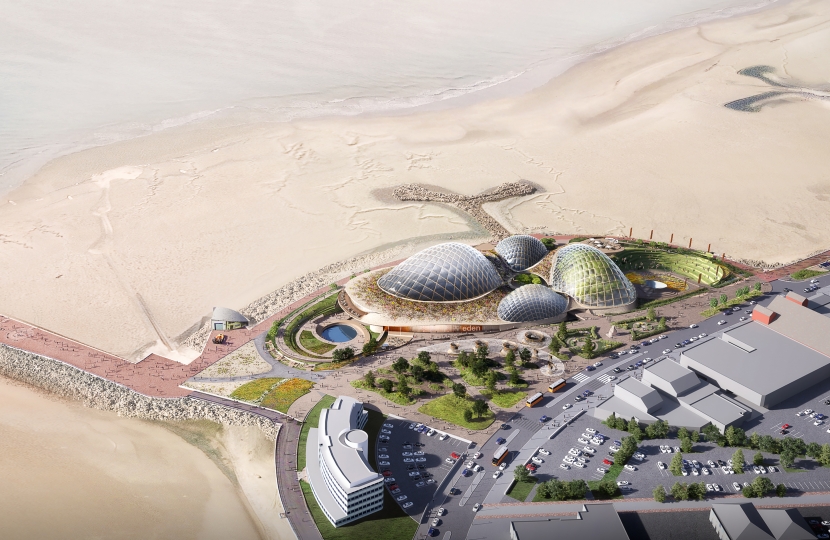 The planning application, which has been submitted to Lancaster City Council, illustrates the vision for the £125m project, a major new exemplar attraction. Eden Project North will showcase sustainable design, reimagining the British seaside resort for the 21st century, and is due to open in 2024.

Eden Project North is being delivered by the team behind the first Eden Project in Cornwall, alongside local partners Lancaster University, Lancaster City Council, Lancashire County Council and the Lancashire Enterprise Partnership, and is one of the key projects in Eden’s plans to expand around the UK and the world.

Eden Project North’s “shell like” domes will be constructed in timber and covered in a flexible transparent membrane with integrated solar cells. These four shells  – known as the Rhythm Machine, the Bay Glade, the Bay Hall and the Natural Observatory – are set in a “dunescape” of landscaped roofing planted with coastal vegetation.

The layout of the domes has evolved since the early stages of design and they now surround the central Four Seasons Garden, to make better use of the available space and light whilst (while) providing more sheltered public space.

Surrounding the buildings will be a collection of beautiful outdoor gardens, designed to reflect the flora, geology and rhythms of their unique coastal environment. These include the Rhythm Garden, which reimagines the existing Bay Arena and the Tide Garden, whose beds spiral down towards a tidal pool at the garden’s centre.

Public access to the promenade running around the edge of the Eden site will not be affected and access to some outdoor gardens will also be possible without buying an admission ticket. RNLI access will also be unaffected.

Eden Project North will be situated on the former site of the Bubbles leisure complex with the Grade II* listed Winter Gardens and Midland Hotel its near neighbours. The project has been designed in a way which is sensitive and complementary to these important buildings and sightlines across the bay.

The project will have two restaurants, one on either side of the site, with both featuring indoor and outdoor seating and boasting spectacular views across Morecambe Bay.

The Eden Project team has worked with local partners, including Lancashire County Council, Lancaster City Council and numerous providers of public transport, to formulate a transport strategy for Eden Project North. The planning application is supported by a comprehensive Transport Assessment, Travel Plan and Environmental Impact Assessment which collectively provide a rigorous assessment of traffic and parking impacts.

Visitor flow will be managed with timed ticketing slots and combined travel and admission tickets. Incentives will be offered for those who arrive by walking, cycling or public transport.

Visitors who chose to arrive by car will be required to pre-book spaces either in existing car parks in Morecambe or at the park and ride service at junction 34 of the M6 to prevent congestion. Eden will continue to engage with and support the local community and other interested parties regarding future transport plans.

Eden’s ambition is for the construction and operations of Eden Project North to go beyond net zero carbon emissions and achieve a net positive environmental position.

The submission of the planning application follows a formal consultation incorporating an online exhibition and in-person events. Feedback from the online consultation was overwhelmingly positive, revealing that 97 per cent of respondents were in support of Eden Project North with 94 per cent agreeing that the benefits will be felt throughout Morecambe and the wider area.

When asked if they supported the general design principles and approach for Eden Project North, 97 per cent of respondents said yes while 88 per cent supported the overall approach to the transport strategy.

Eden has committed to working with local stakeholder groups to formulate ticket concessions for local people, similar to the local’s pass and annual memberships offered by the Eden Project in Cornwall. School visits, educational programming and youth schemes will also be a major part of the Eden Project North offer, as they are in Cornwall.

The application has been submitted to Lancaster City Council and will now be subject to a statutory consultation period. It can be accessed using the reference 21/01113/FUL. A decision on whether planning permission is granted is due before the end of this year (2021). WSP acted as planning consultants for the Eden Project North planning application.

David Harland, Chief Executive of Eden Project International, said: “The submission of the Eden Project North planning application is the culmination of years of hard work from the Eden team and our partners and a reflection of our many conversations with the Morecambe community.

“Eden Project North is a true collaborative effort and everyone who has taken part in our consultations, both formal and informal, can be confident that their input has helped shape this project. We are enormously proud of how this project has developed and hugely grateful to everyone who has contributed to it, especially considering the incredibly difficult circumstances of the last 18 months.

“This is a huge moment for Eden Project North but we are not resting on our laurels. The hard work continues and we hope to have positive news about funding for the project before the end of this year.”

David Morris, MP for Morecambe and Lunesdale, said: “I am sure the Council will look favourably on the Eden application as it is what the whole of the community in Morecambe and the wider area want. This will also be a hugely significant milestone in securing the £70 million funding from the Government that is required to make Eden a reality and create prosperity and opportunity for current and future generations.”

Debbie Francis OBE, Chair of the Lancashire Enterprise Partnership which contributed £1.2m of Growth Deal funding, said: “It is really exciting that Eden Project North has reached another milestone and the county is one step closer to seeing such a transformational scheme for both the immediate and wider area come to fruition.”

"We've been working with Eden for some time to understand their plans and how we can help make any journey for visitors to the site, whether by car, bicycle or public transport; as easy and sustainable as possible.

"These are exciting times and we're proud to be directly involved in helping to make this happen."

Professor Dame Sue Black, Lancaster University’s Pro Vice-Chancellor for Engagement, said: “We continue to be fully supportive of Eden Project North as a unique and exciting opportunity aiming to co-design a better future for our region.

“As a civic university we are committed to success in the Northwest and, with our partners, we will address some of our community's most pressing issues including improving health, raising educational standards and growing our local economy.

“The submission for planning permission is the next step on our journey and we welcome the tremendous progress that has been achieved and are appreciative of the continuing level of local support and encouragement that this project has engendered.”

With the planning application submitted, Eden is still working on securing funding for the landmark project and conversations with the UK Government are ongoing.

In September 2020 Eden submitted a business case to Government which makes the case for £70m of public investment in Eden Project North.

The report presents Eden Project North as a key driver of the UK’s post-Covid green recovery and shows that it is a “shovel-ready” project which would deliver significant economic, environmental and social benefits for Lancashire and the wider North West region, as well as contributing to the wider levelling-up agenda and the Government’s 25-year Environment Plan.

Eden Project North is projected to attract around one million visitors a year and directly employ more than 400 people. The business case estimates a visitor spend of more than £200m per year in the region (not including money spent at Eden Project North) which would support an additional 1,500 jobs.

Eden Project North, says the report, is poised to contribute to the UK’s carbon net zero and green jobs targets, both directly through its operations and through green education programmes delivered with Lancaster University.

In total, the business case projects that the eventual cost of Eden Project North will be £125m. Eden is seeking a mixture of private and public funds to make up the difference beyond any central Government funding.

The Eden team has a proven track record of delivering regeneration projects, with the Eden Project in Cornwall transforming a former china clay pit, which was sterile, unstable and had no soil, into the world-class destination it is today.

Eden in Cornwall has welcomed more than 22 million visitors and added more than £2.2bn to the regional economy since opening in 2001. In recent years, it has continued to attract around 1m visitors a year.