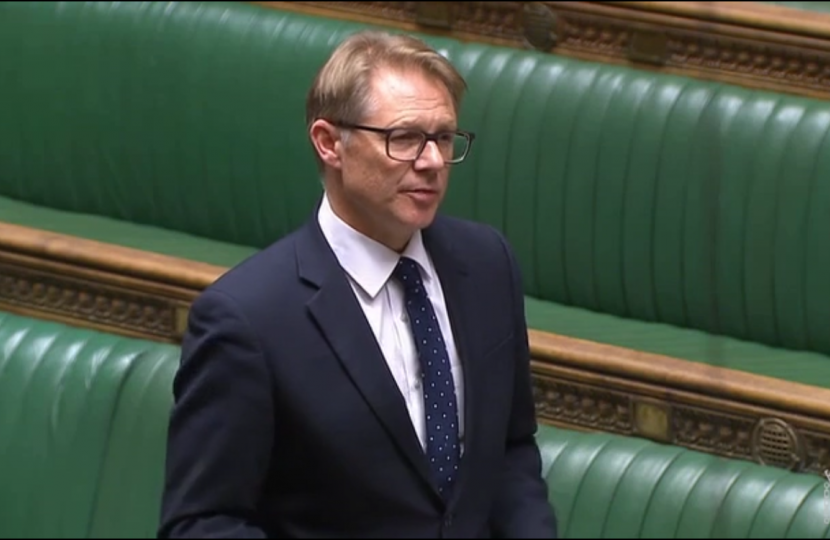 Following a productive meeting with the Chancellor on Monday evening with Eden international Chief Executive David Harland. David Morris MP further made the economic case for the Eden Project in Morecambe by securing an Adjournment debate in the main chamber today (17th October). The debate was answered by Minister for the Northern Powerhouse Rt Hon Jake Berry MP.

‘Local funding partners, the county council, Lancashire local enterprise partnership, the city council and Lancaster University are leading investment, with the involvement of Lancaster and Morecambe College to train a future workforce for the future in green initiatives in the Morecambe and Lancaster area. Stakeholder progress is well under way: I can exclusively confirm that the city council and all the other stakeholders that I mentioned are now in agreement and that the process for releasing the land required for building, along with further millions in funding to Eden, will begin when the proposal to the Treasury is taken forward. On that condition, part-funding will come forward from Eden and from central Government, and the land can then be released. The land allocation is welcomed by Eden, in line with what has been reflected in public consultations with it. Indeed, responses to my own survey are still arriving in my office, reinforcing the fact that thousands of people locally and throughout our Lancaster and Morecambe area would like to see the Eden Project become a reality.

The imminent Budget provides the opportunity for a signal that further demonstrates, on top of the £100,000 in the last Budget, the Government’s commitment to this game-changing project. I have had repeated meetings with the CEO of Eden, David Harland, and with the Chancellor; further meetings with the Treasury are ongoing. Lancashire and Eden will collectively lead, but the Government’s commitment is now vital to create a genuinely transformational project for my area’

‘In conclusion, I would like the Minister to indicate the Government’s commitment to capital investment for Eden Project North and, in doing so, signal that Lancashire can be confident in leading the scheme through to a planning application submission in spring 2020. The Minister has been to Morecambe on many occasions, but I want to give him an open invitation. Perhaps he can bring along our right hon. Friend the Prime Minister, who has indicated that he would like to come to Morecambe for a picture with the Eric Morecambe statue. We have a lot going for us in the Morecambe and Lancaster area, and we now need to sweat our assets of the link road, the beauty of the bay and—dare I say?—the city of Lancaster itself. Minister, please help us to make Eden a reality’

One can travel anywhere in Lancashire and find that because of the support of partners, including the local enterprise partnership, Lancashire County Council, Lancaster City Council and Morecambe itself, people are really starting to talk about this hugely exciting opportunity we have in the north-west of England and, more importantly, in Lancashire to have the Eden of the north. It is great that this project enjoys cross-party support, because wherever one goes, one finds that ​people are excited and passionate about driving forward Lancashire’s economy and they want to see this project delivered.

Since the inception of this project, he has shown a dedication to the vision, and it is a bold vision; if someone were to approach an MP in their constituency and say, “I want to build giant mussel shells on the sand looking out to sea,” the MP could, if they were a doubter or they did not have the vision and passion of my hon. Friend, think that that person may be pulling their leg. But of course they are not, because the Eden Project has a track record of delivering these inspiring structures and inspiring the next generation about helping our environment.

Of course, more is happening in Morecambe, and I was delighted that it has recently secured the funding to go forward to the next phase of the Government’s future high streets fund. I was particularly pleased that in the last round of coastal community funding we were also able to support the Winter Gardens to have a new central heating system, which will transform it to a year-round venue. My hon. Friend is no stranger to the Winter Gardens, because he has a long history of supporting it. I believe I am correct in saying that he appeared there playing a guitar with members of Whitesnake—you may be a fan, Madam Deputy Speaker—to raise funds for the Morecambe Winter Gardens in its darker days, before we managed to support it with the coastal communities fund. He is passionate and he has a record to be proud of in his constituency, and I know he is valued by local residents from my many visits to the area.’

‘I end with a quote from Morecambe’s most famous son—after my hon. Friend the Member for Morecambe and Lunesdale, of course, so Morecambe’s second-most famous son, Eric Morecambe. This is the approach we need to take to the cocktail of funding that we are going to blend. He famously said:

“I’m playing all the right notes. But not necessarily in the right order.”

I hope that we will get all the right money, albeit not necessarily in the right order. Let us work together to make sure that this happens.’

Quotes taken from Hansard full text of the debate can be found here: