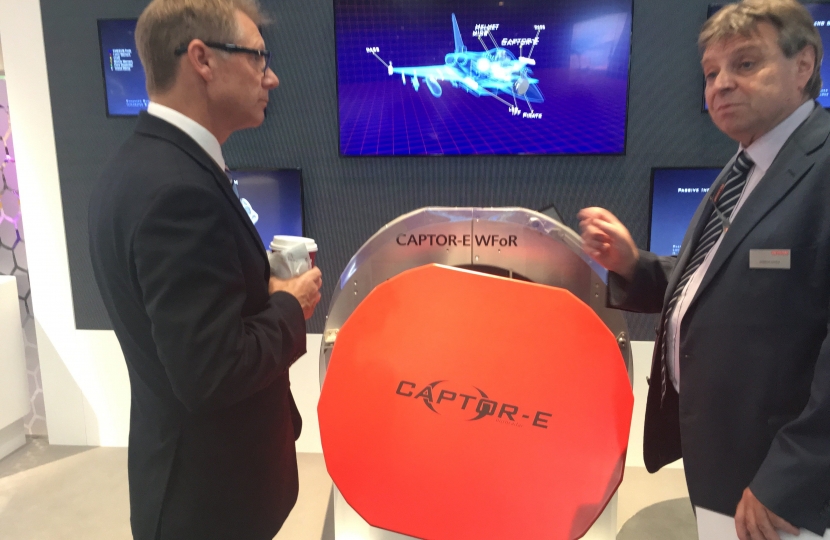 Following the news last week by BAE Systems that 750 jobs may be lost from Warton and Samlesbury due to a restructure with BAE.

I have spoken to BAE systems and with Government Ministers and have been kept updated on a solution going forward, but my hope is that as on previous occasions jobs can be found for those displaced workers on other projects.

It is vitally important that we continue to promote the work of BAE especially the Typhoon jets to foreign markets particularly in the Middle East to fill the order books once again and retain our expertise and skills in Lancashire.

I have not yet been contacted by any Constituents who are affected by this but if you are an employee of BAE and live in Morecambe and Lunesdale please do not hesitate to contact me.

This same local Labour Party criticised me for going to Saudi to secure an order for two jets a few years ago and it’s Corbyn’s Party Policy not to sell arms to the Saudis. It's Saudis slowing of orders of Typhoons that are one of the main factors for this issue. So for Labour to claim some moral high ground is hypocrisy of the highest order..

This letter was instigated by Unite Union who pay money to some of the 7 labour MPs who were on this letter. It was only signed by 1 Tory MP and no other Tory MP in Lancashire have been subject to an attempted sustained campaign regarding the letter. It is clearly just a cheap political shot and not really cross Party as claimed.

In fact the Government have just procured an order from Quatar for 24 Typhoons which is expected to help secure the jobs at BAE.

I have been in contact with Ministers and BAE systems and been working with my MP colleagues in the facilities that could be effected to help where we can within our remit. I want to see the jobs preserved and ordinarily the jobs are secured in new projects. I've actually written a Parliamentary motion praising all efforts to stakeholders in trying to protect jobs in this issue. Last time I looked no local labour MP had signed it. It carries more weight than a unionised letter written to the Prime Minister for cheap political reasons at the expense of the staff and employees at BAE systems."

That this House applauds all cross-party initiatives to safeguard employment at BAE Systems; and notes that Saudi Arabia, which accounts for some 20 per cent of BAE Systems' overall sales, has bought more than 70 Typhoons but is now prevaricating about buying another 40.