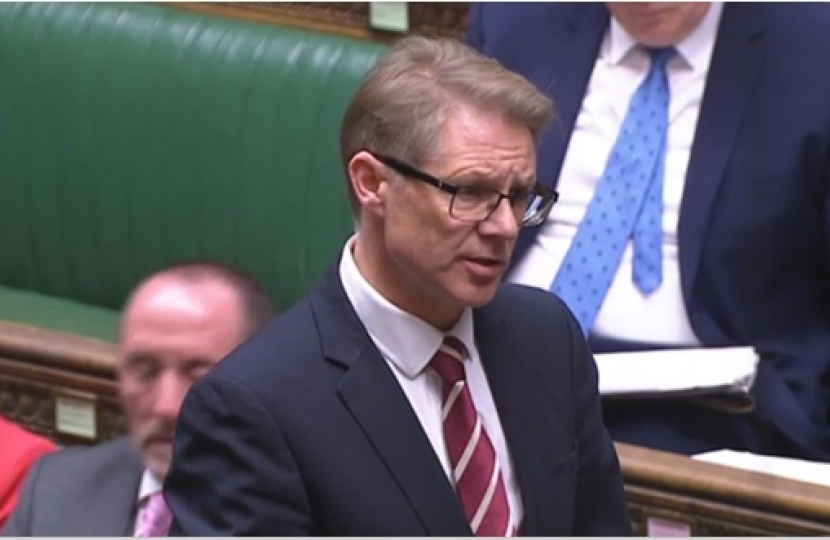 Universal Credit was rolled out in Morecambe and Lunesdale in April 2016, and since roll out David Morris MP has been meeting with the Job Centre regularly. Feedback from Morecambe Job Centre has been extremely positive, with an increased number of staff and the vast majority of Universal Credit claimants have had a positive experience.

Being mindful of the fact that the most complicated cases which experience the most difficulties access the Citizens Advice Bureau for assistance, David Morris MP has been meeting regularly with the CAB in recent months. From the latest meeting the CAB raised the difficulty clients can have when paying back their advanced payments as the statutory rate of 40% is too high. David Morris MP promised to raise this with the Minister and suggest an alternative rate, he has done this privately in a meeting and raised this issue again in an intervention on the floor of the House of Commons today.

My constituency was a pilot scheme for universal credit, and I regularly meet the jobcentre and the citizens advice bureau. The important point is that there were teething troubles in the early days, but people can now get a loan on the day. The worst wait is seven days, depending on the individual’s circumstances. The problem—if there is a problem that has to be addressed—is how the loan is paid back. The repayment cap is currently at 40% of payments. Would the Secretary of State look into a 10% rate instead, to help the system flourish even further?

The advance is typically paid back over six months, so it is essentially a deduction of around 8% from universal credit payments for the first six months. The figure of 40% takes into account all deductions that may conceivably apply in such circumstances.

I have given way numerous time already, probably a multiple of the number of times the shadow Secretary of State gave way. I do not want the House to miss this point: universal credit represents a generation-changing culture shift in how welfare is delivered and how people are helped, creating a system that allows people to break free from dependency, take control of their lives and move into work. Our analysis shows that 250,000 more people will be in employment as a result of universal credit when it is fully rolled out. Universal credit is picking up from a deeply flawed system and striving to solve problems that were previously thought unsolvable.

‘I agree with the North Lancashire CAB that the 40% rate is too high and can cause issues for claimants with further debt. I will be continuing to raise this point with the Secretary of State for Work and Pensions as I would like to see the figure lowered and the payback of the advanced payment loan stretched over a longer and more manageable period’