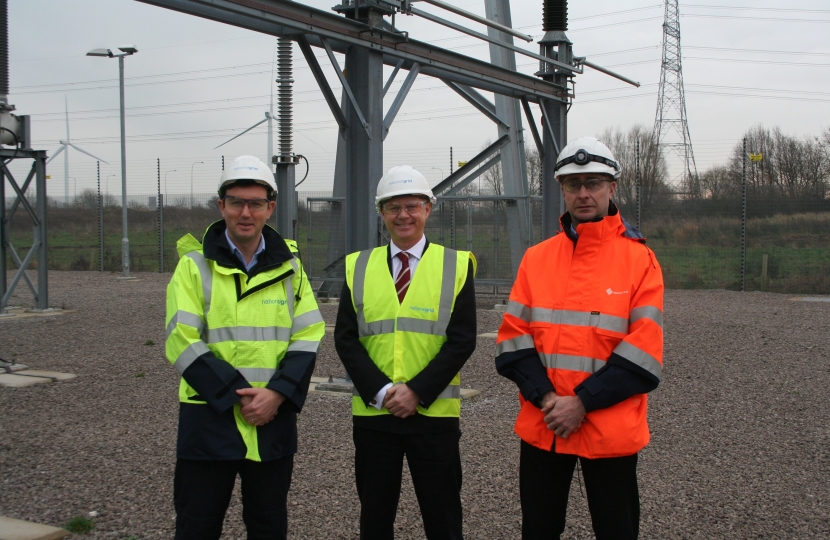 David was keen to discuss how National Grid will minimise disruption to local residents during the construction phase of the project.

Mr Morris also discussed the economic benefits for the area, with National Grid encouraging local businesses to visit www.competefor.com/nationalgrid and register for updates on potential opportunities.

If consent for the project is granted, the construction phase could create many jobs, with National Grid hoping to source a significant proportion from people living in Lancashire.

David Morris said:  I was pleased to meet with National Grid engineers at the Heysham Substation to share with them concerns of the residents in the Mossgate Park area. I was impressed by the lengths the engineers had gone to ensuring minimum disruption to the residents, even changing the route of the tunnel to ensure that it did not go under homes on Mossgate Park. I am supportive of the project as it will bring exciting employment and training opportunities to our area, but I will still be meeting National Grid regally to ensure that the project team is working well with local residents’

A key element of its proposals is a tunnel under Morecambe Bay.  At 22km in length, one end of this tunnel would be at the site of the former Roosecote Power Station, near Barrow, while the other would be at the existing substation in Middleton, near to Heysham.  The proposed tunnel would avoid 60km (37.5km) of connections onshore around Morecambe Bay and into Lancashire.

Work proposed by National Grid at Middleton includes the assembly of the tunnel, the processing of the material removed and the construction of substation equipment.  .  Also included is the undergrounding of a section of the existing 132kV overhead line across the construction site..

David was keen to discuss how disruption to local residents would be minimised, and was reassured by National Grid’s range of proposed measures.  These include environmental methods, such as tree planting, as well as working restrictions to reduce any potential impacts of the project on nearby residential properties.  The company is also working with local stakeholders to develop appropriate transport solutions to minimise disruption to local residents.

National Grid is now considering the feedback submitted as it prepares the final plans for submission to the Planning Inspectorate.  While this is likely to be National Grid’s final consultation on the full scheme, there will be an opportunity for people to submit their views to the Planning Inspectorate when they hold their examination on the proposals.